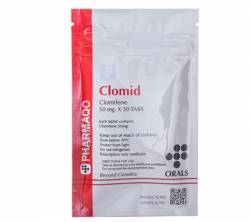 Clomid is an oral preparation containing 50 mg of the substance Clomiphene Citrate.

Clomid, as it is most often called, is one of the most popular PCT drugs today, and is a staple of most bodybuilder's protocol. Clomid is typically prescribed for women to aid in ovulation. In men, the application of Clomid causes an elevation of follicle stimulating hormone and luteinizing hormone. As a result, natural testosterone production is also increased. This effect is obviously beneficial to the athlete, especially at the conclusion of a cycle when endogenous testosterone levels are subnormal. Clomid will gradually raise testosterone levels over its period of intake.

Clomid is also effective as an anti-estrogen. With the intake of Clomid, the athlete gets the dual effect of blocking out some of the effects of estrogen, while also increasing endogenous testosterone production.

Users often take the drug in a dosage of 100-150 mg a day for 4-6 weeks following the end of a cycle. Users often add substances such as HCG and proviron to make their PCT plan even more sound and effective.