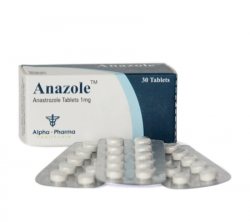 Anazole is a non-steroidal drug which is used to treat breast cancer. It has been thoroughly studied in women with breast cancer between the 5th-8th decades of life. Anazole contains an active ingredient Anastrozole.

Anazole has been studied quite well in the laboratory for its side effects. Further, its side effects in humans have been well recorded in a number of clinical trials. From these clinical studies, it is estimated that at least 5% of individuals who do take Anazole develop a variety of side effects in varying range of severity. The most common side effects of the drug include: fatigue and general malaise, vague body pains, headache abdominal cramps and bloating, flu-like syndrome, constipation, diarrhea, gastric upset, swelling of the legs, weight gain, high cholesterol levels, vague muscle and joint pains, softening of bone (osteoporosis), fractures and bone pain. Mood changes, depression, lack of sleep, anxiety, skin rash, hot flashes, vaginal bleeding, cots in the legs, cancer of the uterus.

Besides general tiredness, the next most common complain of patients who take Anastrozole is joint and bony pain. Infact fractures of spine, hip and wrist are all increased in patients who take Anazole for long periods. Despite the wide range of side effects, Anazole is generally well tolerated by the majority of women.