What is Halotestin (fluoxymesterone)? 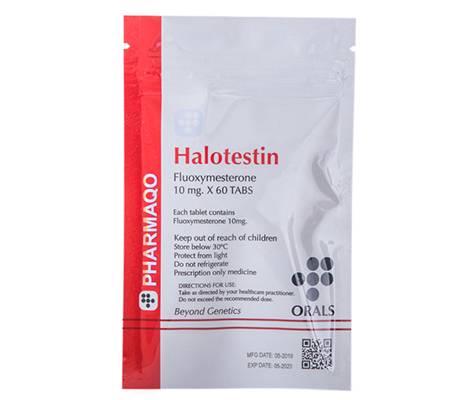 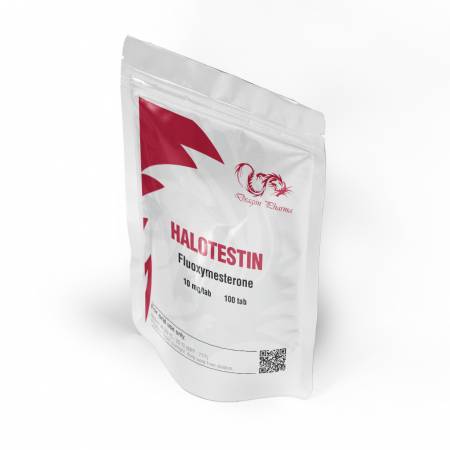 Halotestin was introduced in the United States by the Upjohn Company in 1957. This
company is now part of Pfizer Incorporated. Fluoxymesterone's base hormone is
testosterone; and since it is derived from testosterone, Halotestin shares several
similarities with this base hormone. Like testosterone, Halotestin, or Halo, is a potent
steroid that has extremely strong androgenic properties. Plus, it can be a substrate for
the 5-alpha reductase enzyme just like testosterone. In biochemistry, a substrate is a
molecule that is acted upon by an enzyme.

With the 11beta-hydroxy alteration, Halotestin does not promote aromatization. This
means that estrogen conversion is very unlikely. Gynecomastia, and water and fat
retention will not arise with your use of Halotestin. Nevertheless, because this drug is a
potent androgen you must expect androgenic side effects. Thus, overactive sebaceous
glands resulting to oily skin and acne breakout may pose problems. Alopecia or hair
loss, as well as aggression, may also arise. If you're predisposed with said conditions,
you are cautioned against Halotestin.

One of the most distinct characteristics of Halotestin is its impressive impact on red
blood cell production, and this is manifested by the increase of strength and energy
levels experienced by its users. In addition, it exerts its effects on strength level and fat
loss by simultaneously regulating fatty acid oxydation in the liver and fast-twitch muscle
mitochondria (also known as cellular power plants). Basically, fast-twitch mitochondria
(sometimes called fast-twitch fibers) allow an individual to generate a relatively high and
intense amount of force in a short period of time. This fast-twitch phenomenon is ideal in
strength/power sports such as weigthlifting, swimming, and sprinting; where the athlete
expends short-burst energy. Slow-twitch fibers, in contrast, promote fatigue resistance,
which is ideal in sports that require endurance such as marathon.

Halotestin is noteworthy for giving strength rather than size. Strong and harder muscles
are sure gains with Halotestin. This is why this drug is ideal for athletes who compete in
weight classes like wrestling and boxing, because with Halotestin dramatic strength
gains can be achieved without an increase in weight.
Other sports where Halotestin is an ideal steroid choice is in bodybuilding. Since
bodybuilding requires the shedding of excess body fat. Remember that in bodybuilding
size is not the only factor judges look for. Other criteria are definition, symmetry, and
proportion. Thus, Halotestin is a superb drug during contest preps as it produces
superlatively hard and defined muscles.

Halotestin is able to do this due to its high androgenic properties and non-aromatizable
nature, creating an ideal androgenic/estrogenic ratio. A positive shift in
androgenic/estrogenic ratio is a sure way for the body to burn off unwanted fat. Plus,
this prevents new fat storage ensuring a fat-free, contest-prepped body.
You can acquire the same well-defined and denser muscles with other steroids like
trenbolone, but may gain weight in the process. Trenbolone is known to produce
hardened muscles but with corresponding weight gain.
Halotestin comes in 2mg, 5mg, or 10mg tablets; and is used clinically in males as a
replacement therapy for individuals with symptoms of deficiency or absence of naturallyoccurring testosterone. These conditions include primary and hypogonadotropic
hypogonadism (both congenital and acquired), as well as delayed puberty. In females,
this drug is used to treat mammary cancer in postmenopausal women and hormonedependent tumors.

Halotestin is contraindicated with the following conditions:

What you should be cautious about Halotestin, is that it has c17-alpha-alkylation. A
c17aa drug can cause damage to liver, some of which may be irreversible. It is
important, therefore, to avoid ingesting higher dosages of this drug and using it over the
recommended cycle period.
Prolonged use of high doses of androgens, particularly c17aa oral androgens, can
cause hepatic adenomas, hepatocellular carcinoma, and peliosis hepatic. Note that
these conditions all refer to the liver, as prefix hepato refers to the liver. Cholestatic
hepatitis and jaundice may occur with the use of c17aa androgens. These two
conditions are reversible, however, when use is discontinued. Because of the
hepatotoxicity of c17aa androgens liver function tests should be obtained periodically.
Other side effects that your should watch out for are nasal bleeding, headaches,
gastrointestinal pain, and decreased production of endogenous hormones. Halotestin
may cause such health concerns, especially of you are predisposed to them

The recommended daily intake of Halotestin is 20-40 mg, and a maximum use of eight
weeks. With this recommended dose, salt and water retention will not be a problem.
Usually the general practice is to divide the daily into two equal amounts and take in the
mornings and evenings with plenty of fluids. Since it is a c17aa androgen, Halotestin
can be ingested even during meals without any loss in its potency.
Another safety precaution is not to use Halotestin with other c17aa orals as this can
exacerbate the stress on the liver. Instead, stack Halotestin with orals without the c17
alpha-alkylation, or use it with esterified injectable compounds.
Detection time for Halotestin is five days only if the athlete did not previously use the
drug and if the administration is a single 10 mg dose. The International Olympic
Committee, however, has come up with a screening test that can detect this drug's
metabolites for up to two months after discontinued use.
In cutting phases, it is best to stack Halotestin with Primobolan Depot since you will
have lesser worry with water and fat retention issues as Primo also inhibits estrogen
buildup.

If you're after strong and lean muscle gains, you can use Halotestin alternately with
testosterone enanthate. The drawback, nevertheless, is that a higher possibility of side
effects since both of these compounds deliver strong androgenic activity.
Ancillary drugs are also advised due to this drug's effect on natural testosterone levels.
Halotestin can inhibit production of endogenous testosterone. You can combine HCG
with Nolvadex/Clomid post cycle to revive normal hormonal production in the body.
Although by itself Halotestin does not aromatize, there is still a need for other antiestrogen drugs such as Nolvadex and Clomid during discontinuance. This is because
HCG can activate the aromatase enzyme in the Leydig's cells, the Nolvadex/Clomid
option acts as back up should excess estrogen arise as caused by such activation.
Women are particularly advised against using this drug since virilization symptoms can
occur and can be permanently experienced.