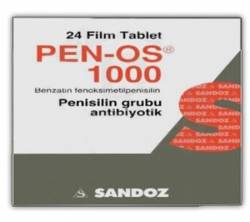 PEN-OS is narrow spectrum antibiotic used to treat mild to moderate infections caused by susceptible bacteria. It is a natural penicillin antibiotic that is administered orally. Penicillin may also be used in some cases as prophylaxis against susceptible organisms. Natural penicillins are considered the drugs of choice for several infections caused by susceptible gram positive aerobic organisms, such as Streptococcus pneumoniae, groups A, B, C and G streptococci, nonenterococcal group D streptococci, viridans group streptococci, and non-penicillinase producing staphylococcus. Aminoglycosides may be added for synergy against group B streptococcus (S. agalactiae), S. viridans, and Enterococcus faecalis.

Prophylactic: Streptococcal infections and rheumatic fever or Sydenham's chorea, polyarthritis, endocarditis, glomerulonephritis in complications such as Congenital or tonsillectomy in patients with rheumatic heart disease, such as tooth extraction small bacterial endocarditis before and after surgery Sickle cell anemia is used in the prophylaxis of pneumococcal infections in children.