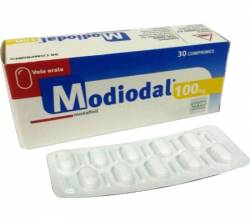 Modiodal is an oral drug that is used for improving wakefulness in patients with excessive sleepiness. The effect of Modafinil is similar to caffeine. Both drugs promote wakefulness by stimulating the brain. Thus, both drugs are considered stimulants. Other stimulants, for example, dextroamphetamine and sibutramine, also have the different effect of suppressing appetite. All four of these drugs affect the neurotransmitters in the brain, the chemicals that the nerves of the brain use to communicate with each other; however, they affect the neurotransmitters differently.

Modiodal is used to promote wakefulness in patients with excessive sleepiness associated with narcolepsy, obstructive sleep apnea/hypopnea syndrome (as an adjunct for treatment of the underlying obstruction), and shiftwork sleep disorder. Narcolepsy is a chronic disease of the brain and spinal cord characterized most commonly by a recurrent, uncontrollable desire to sleep. Shiftwork sleep disorder is a condition in which the normal rhythm of sleep is disturbed, often as a result of working at night.

Modiodal usually is taken at a dose of 200 or 400 mg daily, although the 400 mg dose has not been shown to be more effective than the 200 mg dose. Modiodal can be taken with or without food.

Modiodal can decrease or increase the activity of enzymes in the liver that metabolize (eliminate) other drugs. This can result in decreased levels of some drugs that reduce their effectiveness and increased levels of other drugs that leads to their toxicity. Modiodal  treatment should be carefully monitored if taken with any of these drugs.

The most common side effects of Modiodal in clinical trials are headache, upper respiratory tract infection, nausea, nervousness, anxiety and insomnia. These each occur in more than 5% of patients.