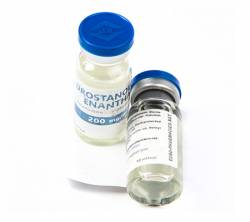 Drostanolone Enanthate, is most commonly used by bodybuilders who are in the "cutting" phase of their training and dieting. While only mildly anabolic, Drostanolone Enanthate extremely androgenic and because of this, brings about a very pronounced amount of hardness and definition to the muscles. On top of this, Drostanolone Enanthate is also noted as being an effective estrogen blocker, and also binds to SHBG, making it possible for other steroids being used to bind more easily to their respective receptors, thus making their presence in the body much more effective. These effects are also noted by bodybuilders who choose to use the oral preparation of Masteron, Proviron.

Bodybuilders looking to incorporate Drostanolone Enanthate into a cycle might stack it with other steroids such as Trenbolones, Testosterone Propionate, and oral compounds such as Stanozolol or Halotestin to bring about an even more pronounced amount of definition and hardness leading up to a contest.