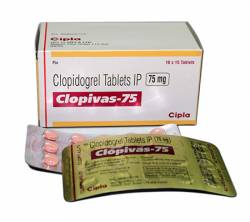 Clopivas pills are used to prevent the formation of blood clots (thrombosis) to reduce risk of heart attack (myocardial infarction) or stroke in people with cardiovascular disease, who have had a recent heart attack or stroke, or who have established peripheral artery disease (poor circulation in the legs caused by blocked arteries). It is also used treat people with unstable angina (chest pain) who are also at risk of heart attack and may be used along with aspirin, which is another anti-clotting medication.

Clopivas contains Clopidogrel, a specific and potent inhibitor of platelet aggregation (clumping), which is part of the process that leads to the formation of a blood clot (thrombosis) to plug an injured blood vessel and stop bleeding. Platelets can also be induced to aggregate when they come in contact with an atherosclerotic plaque (artery wall hardened by cholesterol build up) that has ruptured and this blood clot may end up blocking the artery cutting off blood supply to various parts of the body. If the coronary arteries (supplying blood to the heart) become blocked the heart becomes starved of oxygen which can result in a heart attack; if the arteries to the brain become blocked, oxygen starvation to the brain can cause a stroke.

Clopidogrel in Clopivas inhibits the binding to its receptor on platelets, of a chemical called adenosine diphosphate (ADP) that activates platelets to aggregate. This action keeps the blood flowing and reduces risk of a blood clot forming in people who have cardiovascular disease and who are at risk of heart attack or stroke.