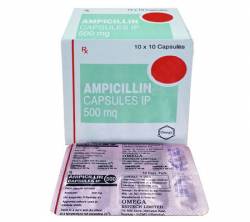 Ampicillin exhibits bactericidal activity and it is suitable for many infections caused by a considerable amount of both gram positive and negative bacteria. Susceptible strains of bacteria include enterococci, Shigella, E. Coli, staphylococci, streptococci, Streptococcus pneumonia, P. Mirablis and various others. Patients have been treated with it for bacterial infections of the respiratory, gastrointestinal and genitourinary tracts. Other conditions it has been used for include gonorrhoea, bronchitis, pneumonia, otitis media, sinusitis.

The main ingredient in Ampicillin is in the penicillin group of antibiotics, and is regarded as a beta lactam. However, it is different form penicillin G. When administered, it is absorbed from the gastrointestinal tract, after which it starts to work against the bacteria. By irreversibly inhibiting the bacterial enzyme called transpeptidase, it helps to disrupt the process in which the bacteria synthesize their cell walls. This results in cell wall lysis and causes the eventual destruction of the bacteria.

Ampicillin capsules each contain 500 mg of the main ingredient. In some cases, doctors will direct adults who are undergoing treatment for bacterial infections of the gastrointestinal or genitourinary tract to administer 500 mg 4 times per day, with each dosage evenly spaced out at 6 hour intervals. Other conditions may require a different dosage. The duration of time for which treatment will be required to continue will differ for each individual based on how the infection responds to the antibiotic. Treatment is generally required to continue until the entire course of medicine is finished, even if symptoms appear to have improved before all the medicine has been taken. Follow the instructions given by your doctor.

Ampicillin may cause unwanted side effects such as: vomiting, flatulence, loose stools, bloated sensation, discomfort of the stomach.