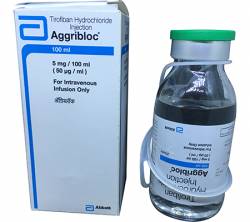 Aggribloc is an anti-platelet agent that helps in preventing blood clots. Aggribloc is used in patients with non-Q-wave myocardial infarction or unstable angina. It is administered in combination with another drug such as heparin and aspirin and is used in treating acute coronary syndrome (ACS). It is also used in patients who eventually undergo atherectomy or percutaneous transluminal coronary angioplasty (PTCA).

Aggribloc is useful in preventing the blood clots during heart attack or chest pain. It is also useful when the patient has to undergo procedures to remove the blockage of the coronary artery. Aggribloc is an antagonist of the glycoprotein (GP) IIb/IIIa platelet receptors. Thus, the drug acts by inhibiting coagulation and platelet aggregation.

Before beginning the treatment with Aggribloc let your physician know if you have severe hepatic disease, ulcerative colitis, stomach ulcers, severe hypertension, brain tumor, any head injury, stroke, aneurysm [blood clot(s) in the brain and any injury, medical emergency or surgery in the last 6-week period. Also let your physician know if you have had any blood clot related disorders or bleeding disorders such as thrombocytopenia, hemophilia etc, before administering Aggribloc.